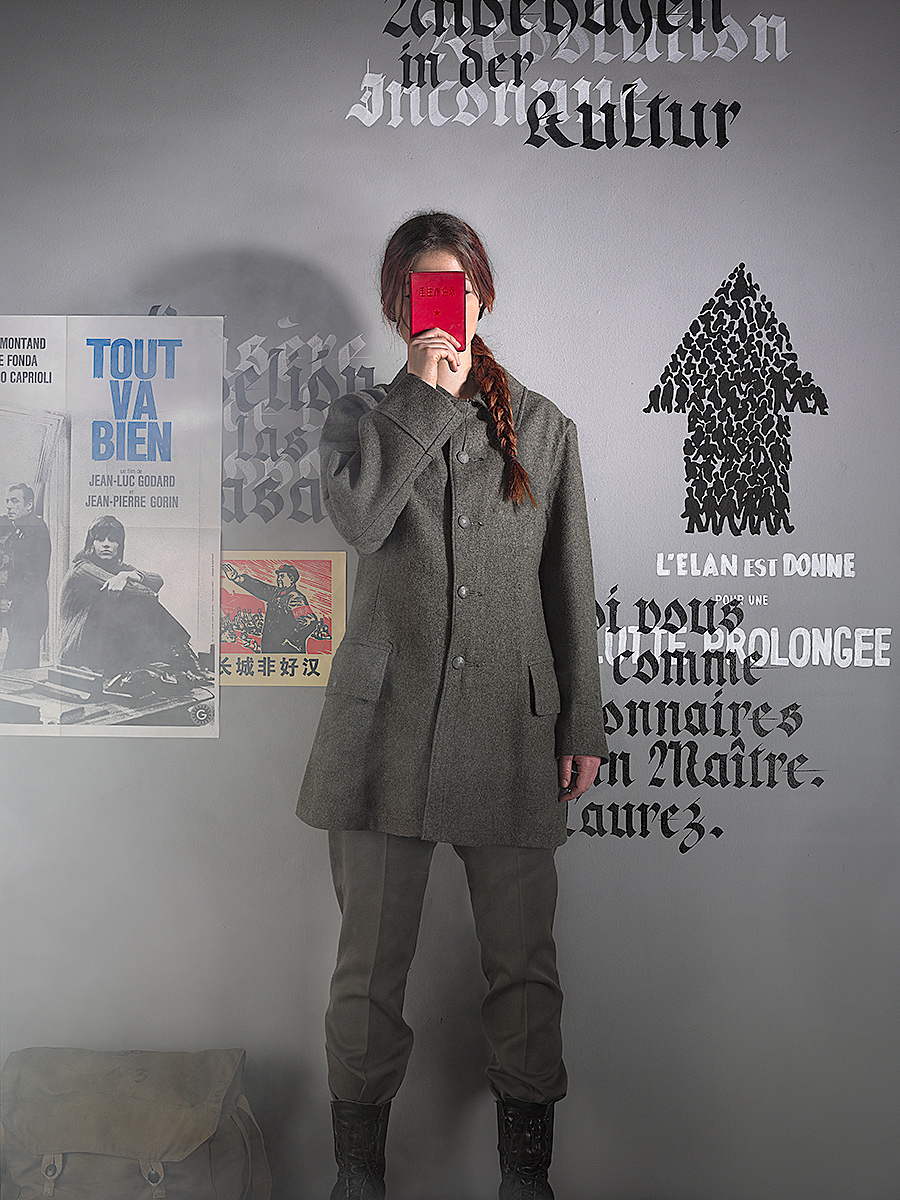 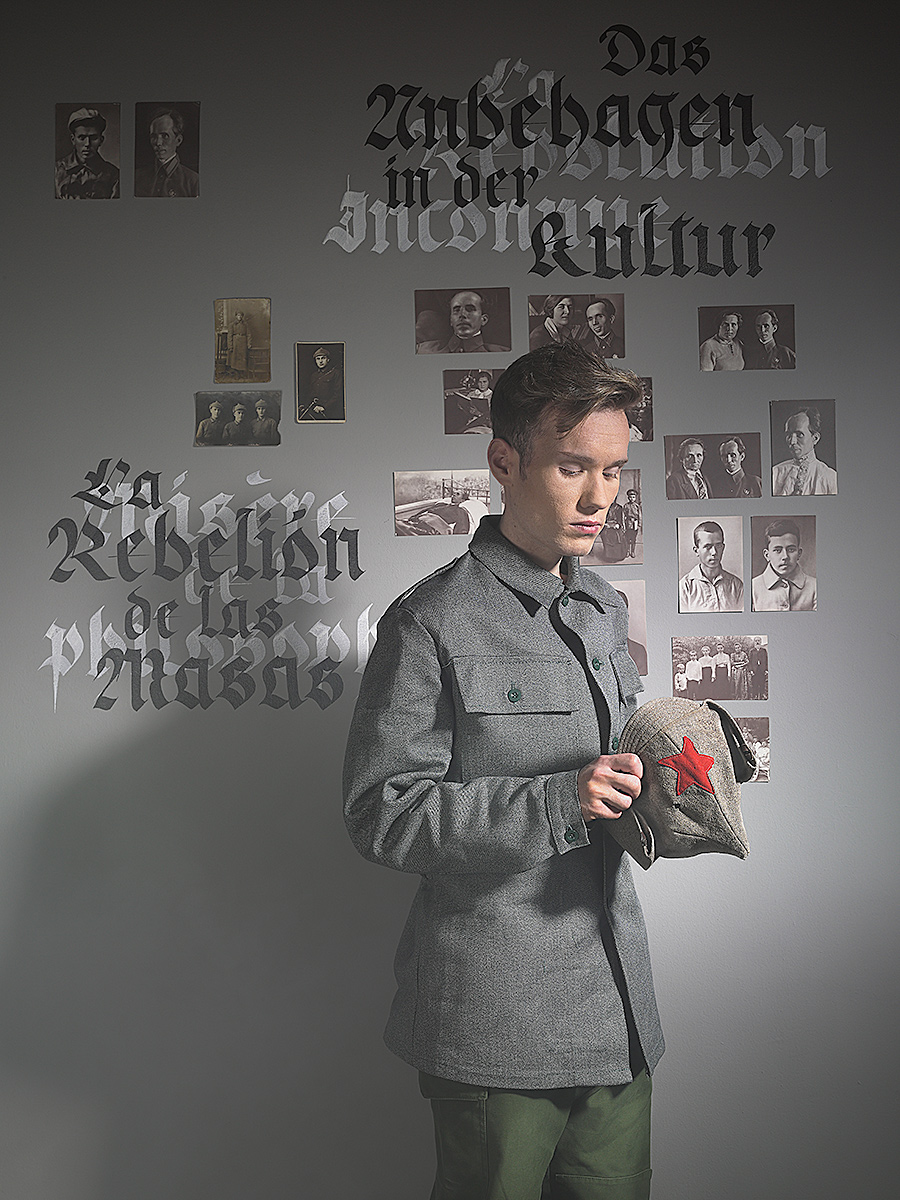 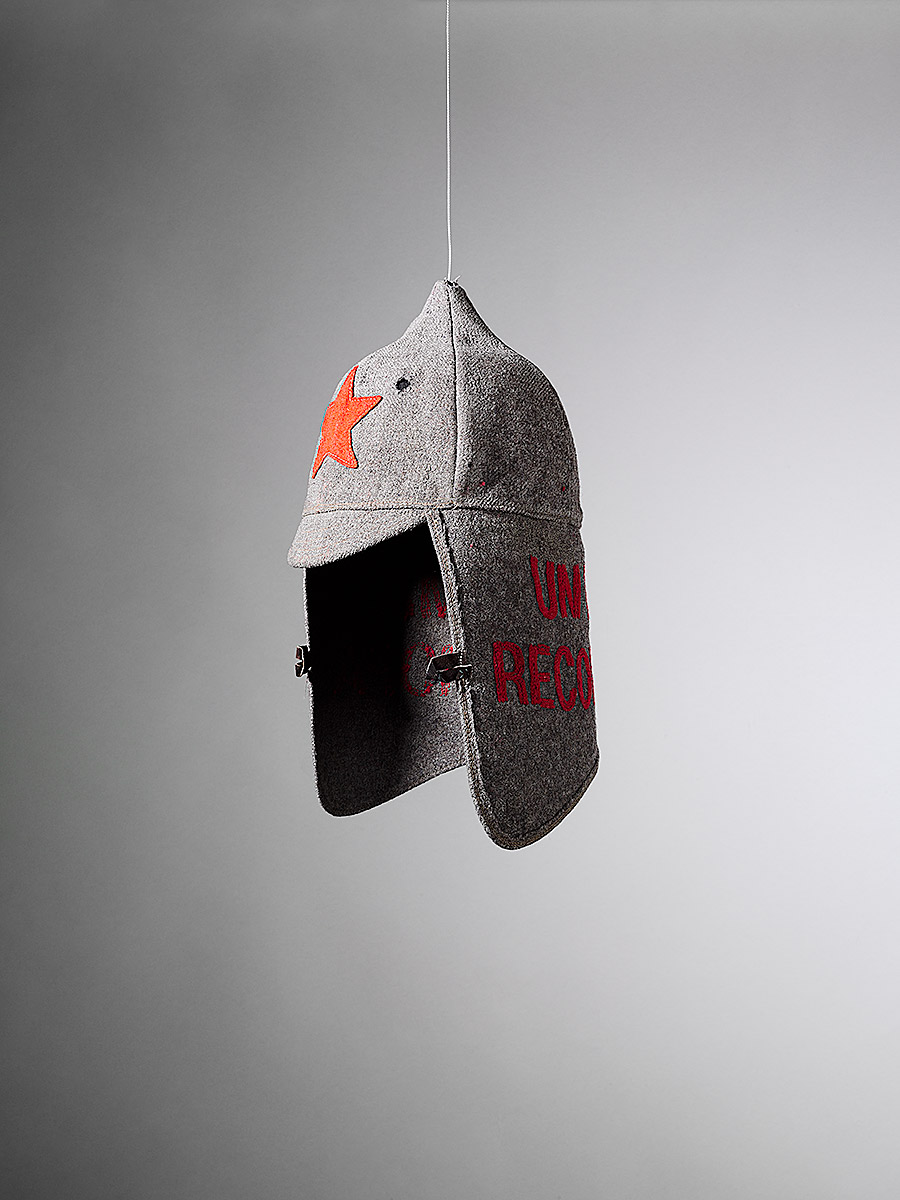 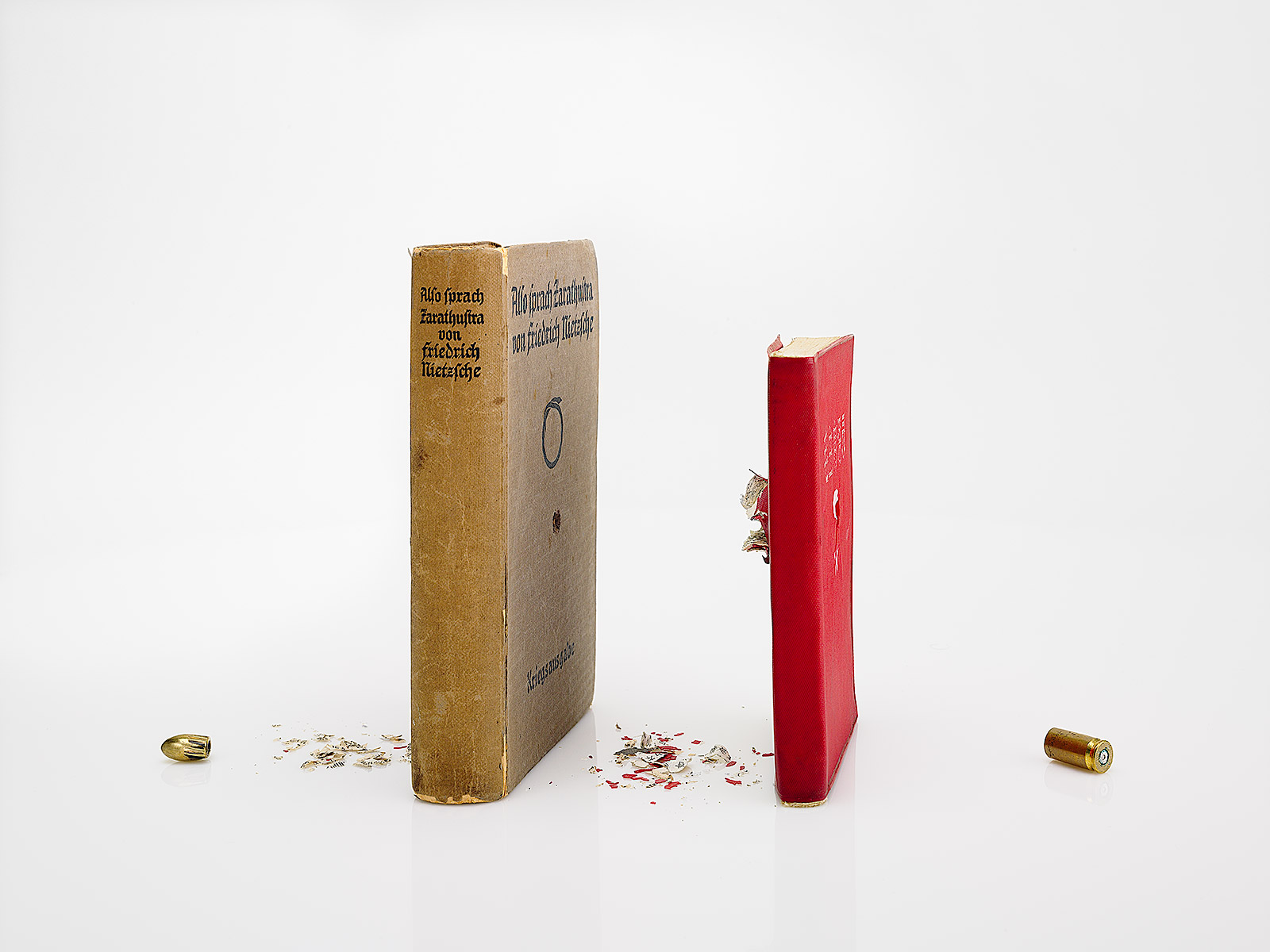 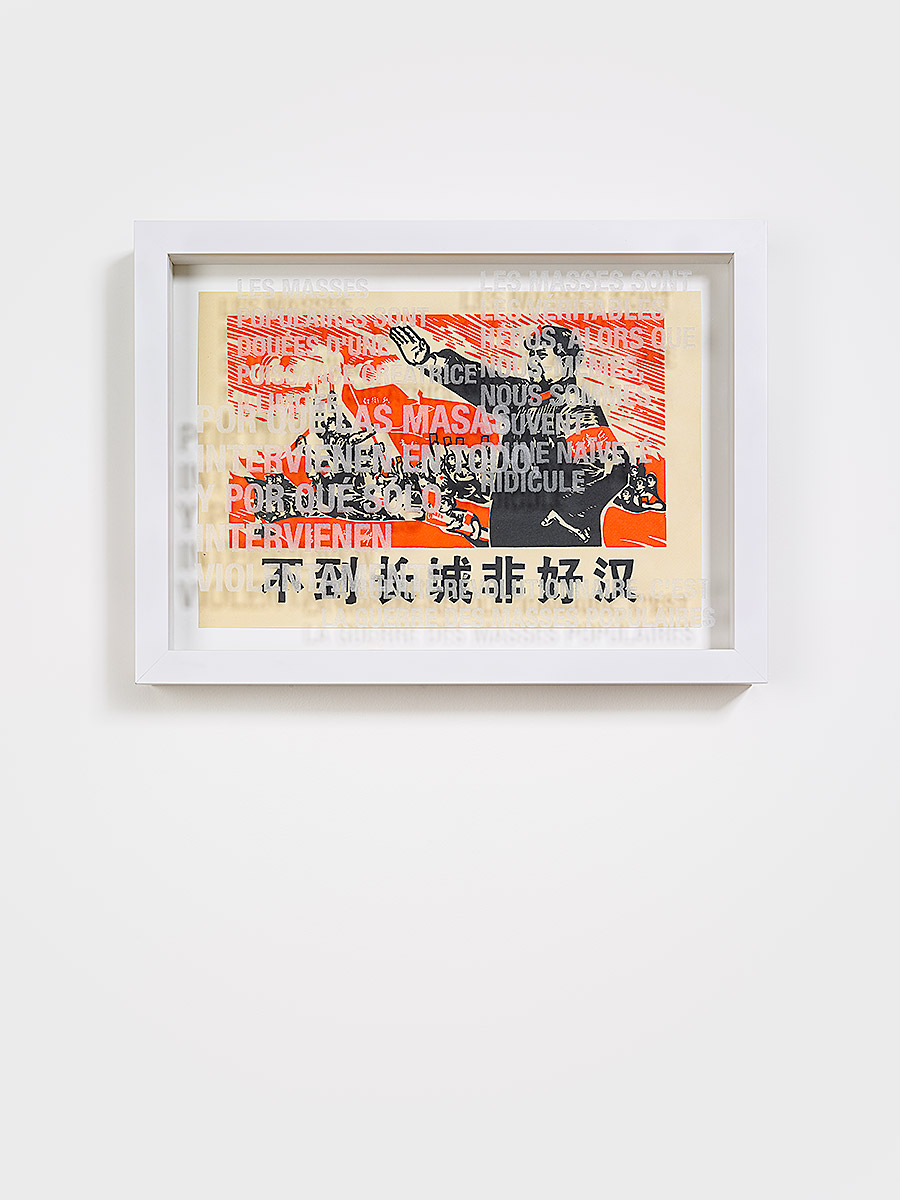 Why Do the Masses Intervene In Everything, And Why Their Intervention Is Solely By Violence?, 2015
46.5 x 34 x 6 cm. | An original 1960s Chinese poster from the Cultural Revolution, made from a woodcut with engraved with texts and mounted in a lacquered wooden display case. Decline of the West I, 2015
145 x 110 cm. | Printed with pigmented inks on Hahnemühle Photo Rag Ultra Smooth paper, mounted in a display case. 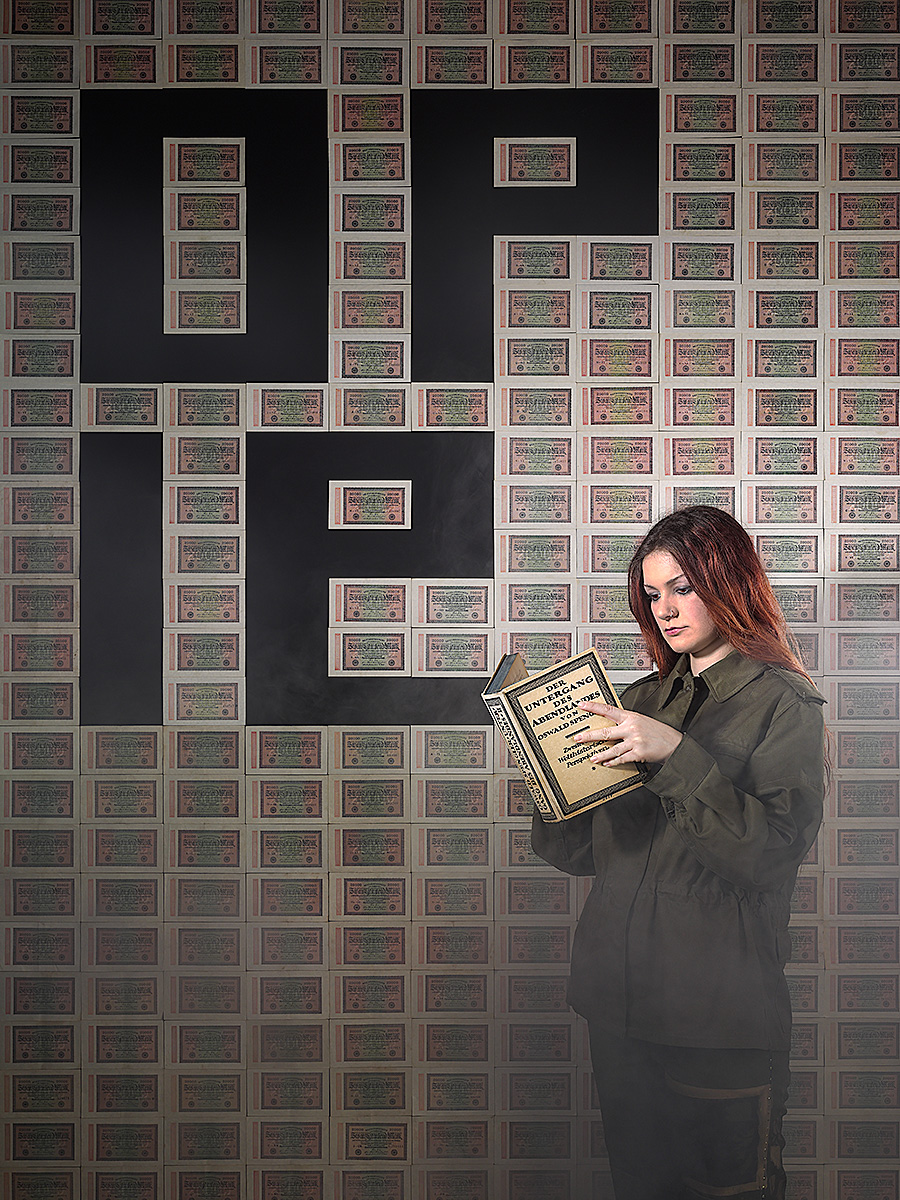 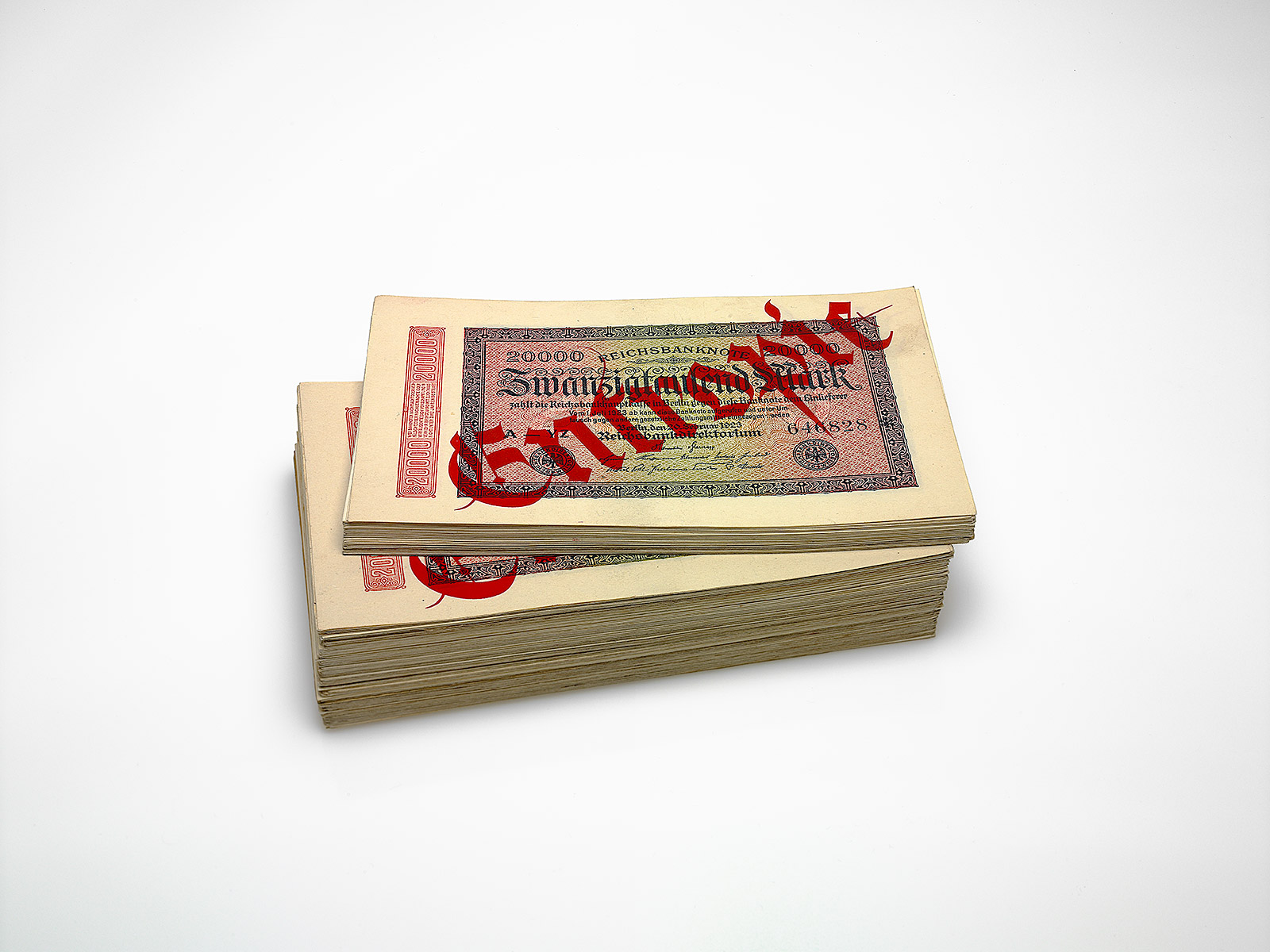 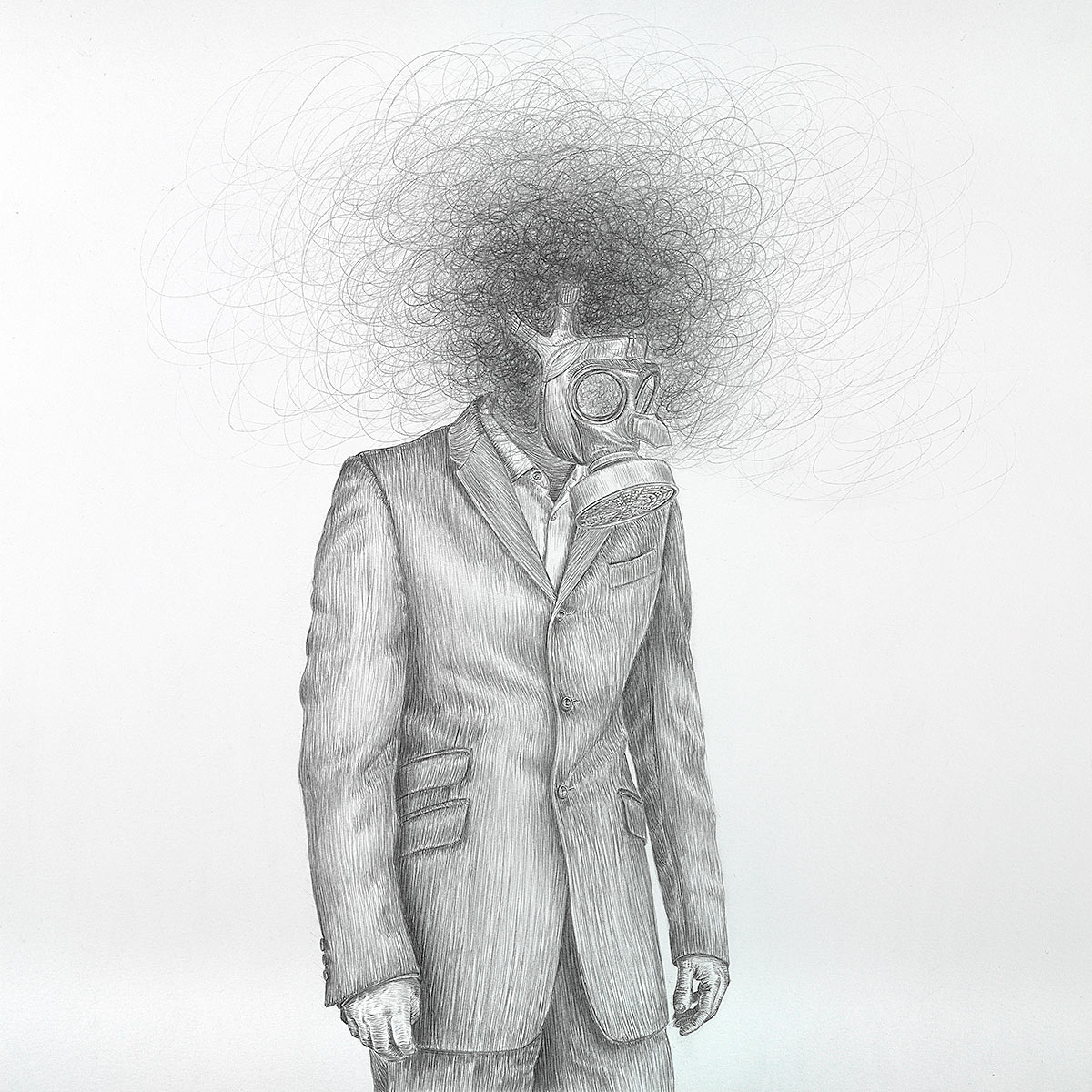 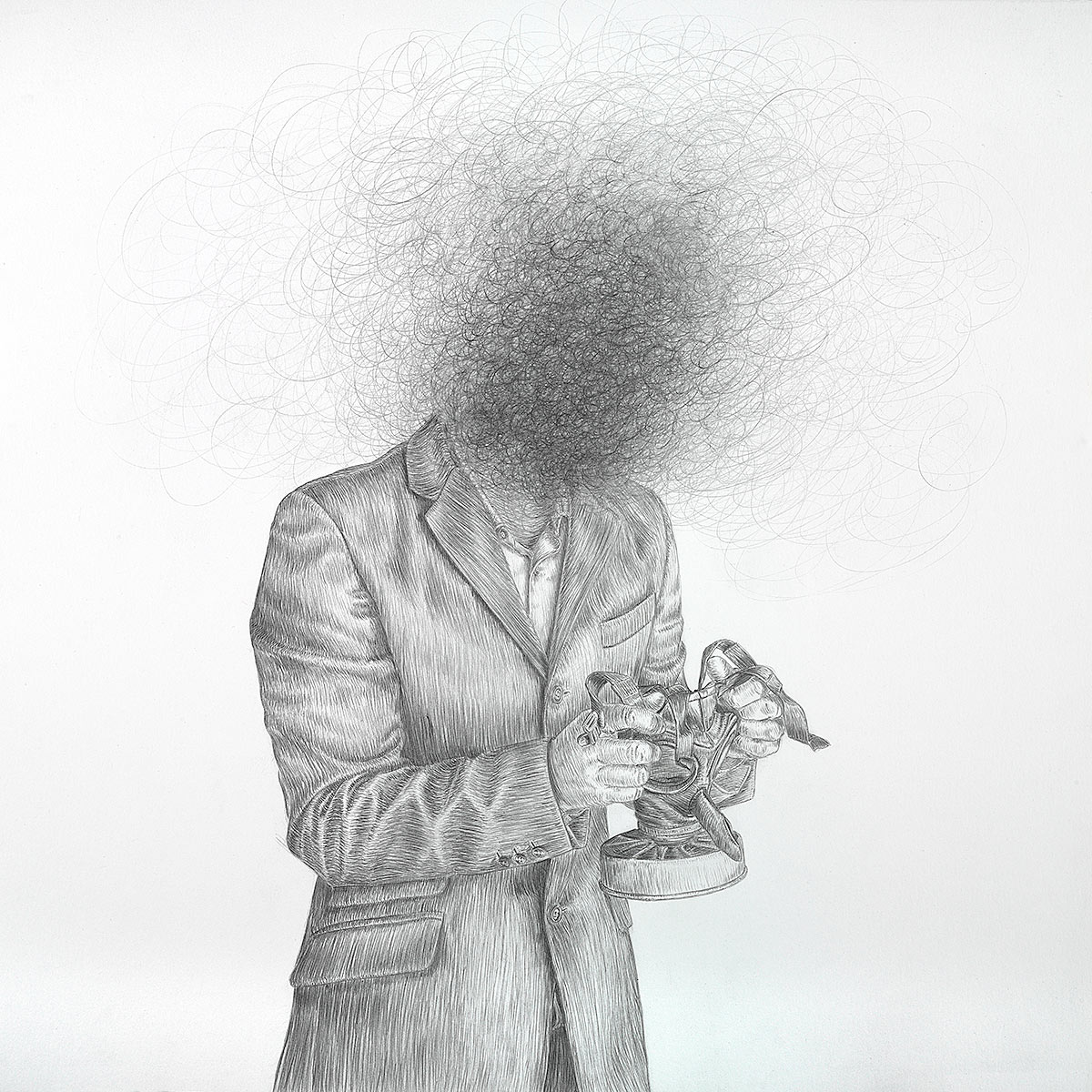 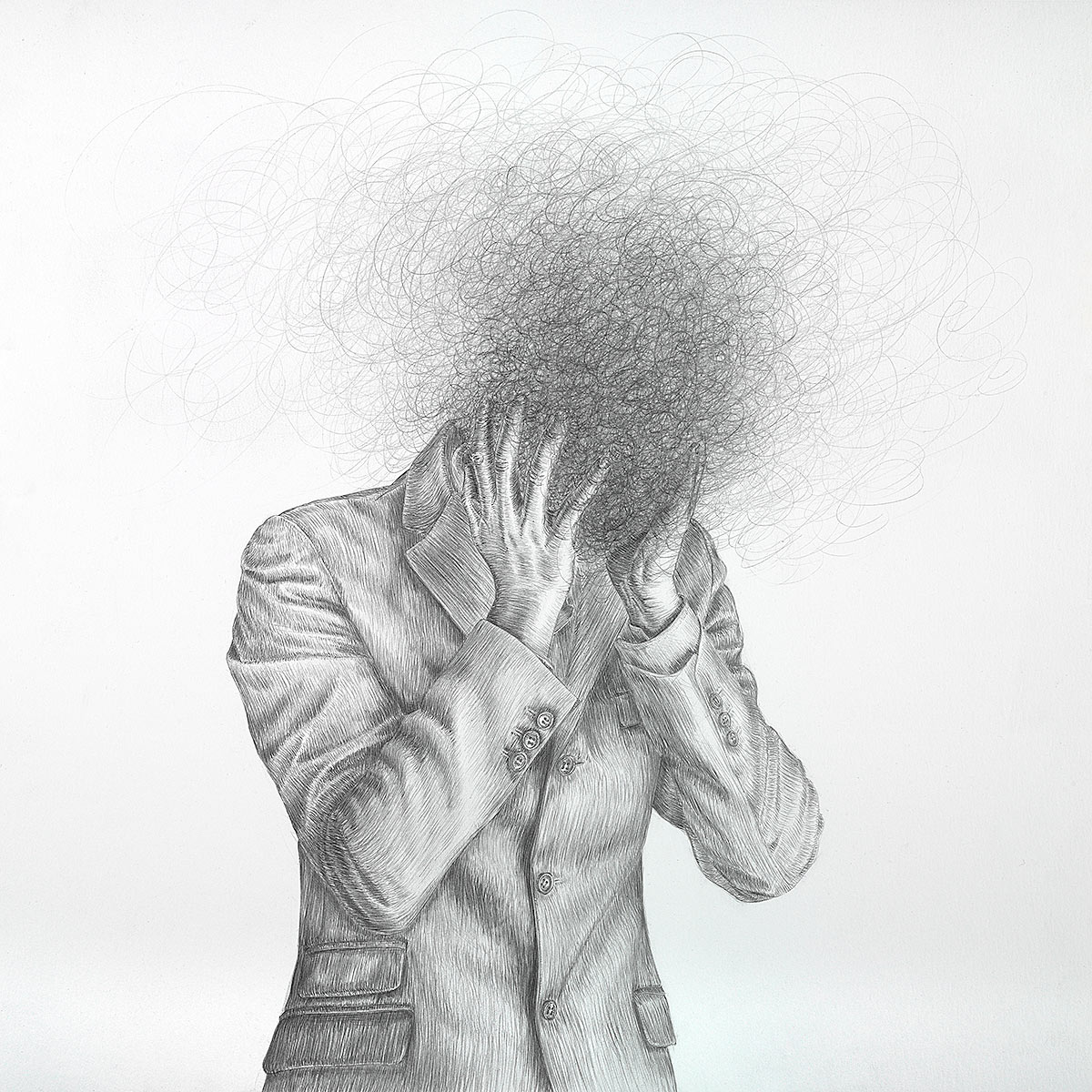 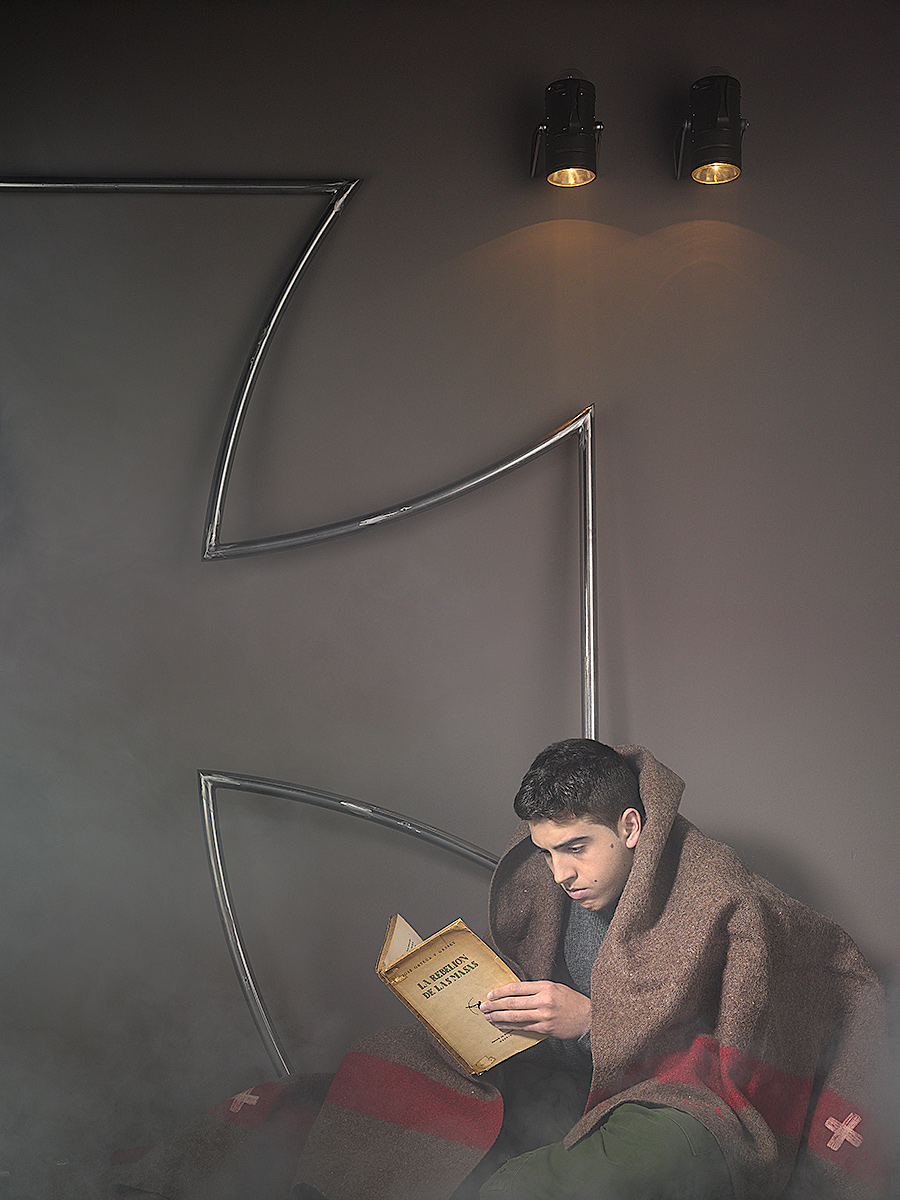 The Revolt of the Masses, 2016
145 x 110 cm. | Printed with pigmented inks on Hahnemühle Photo Rag Ultra Smooth paper, mounted in a display case. Eisernes Kreuz, 2016
250 x 250 x 80 cm. | A structure of painted iron, steel cables, steel clothes hangers and clothing from various European armies including those of Germany, France, Britain, Switzerland, Czechoslovakia, Sweden and Austrian from 1944 to the 1990s. 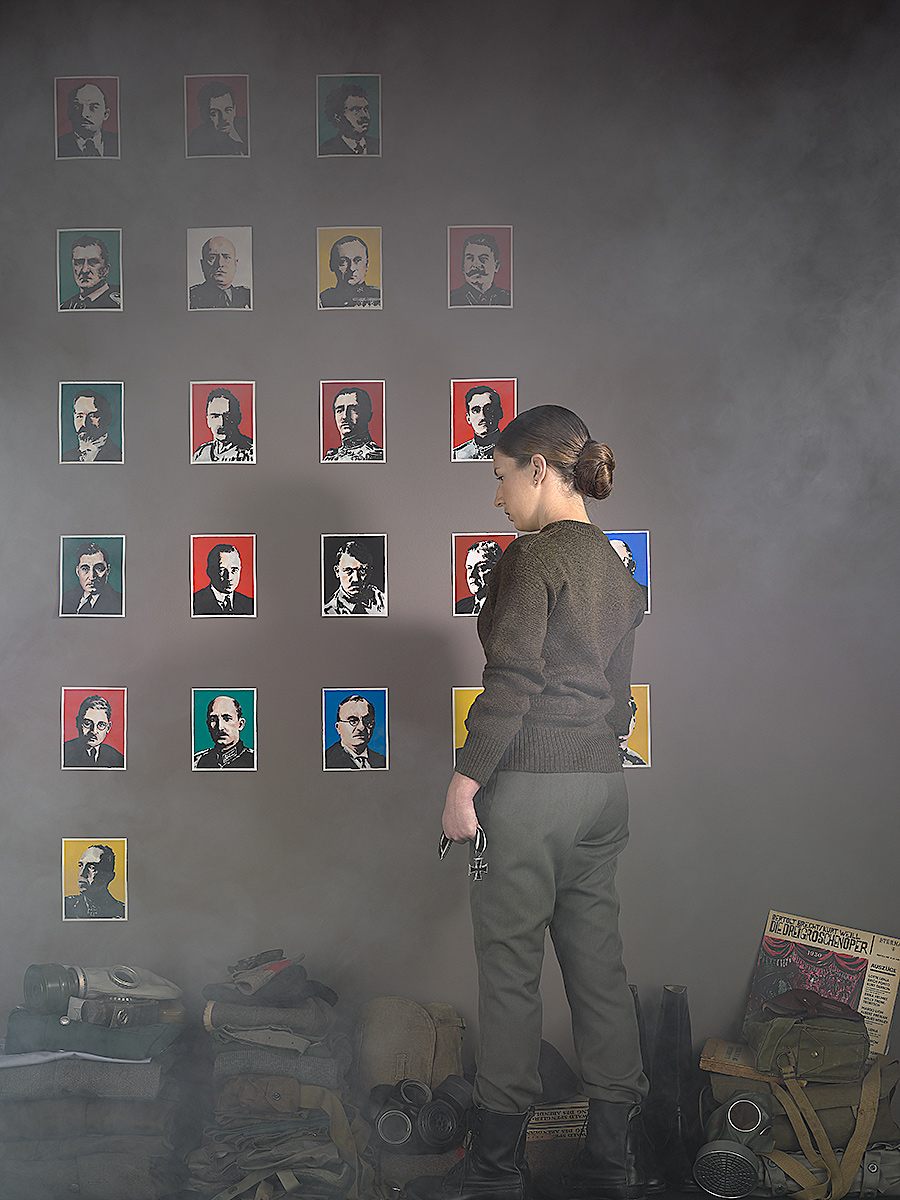 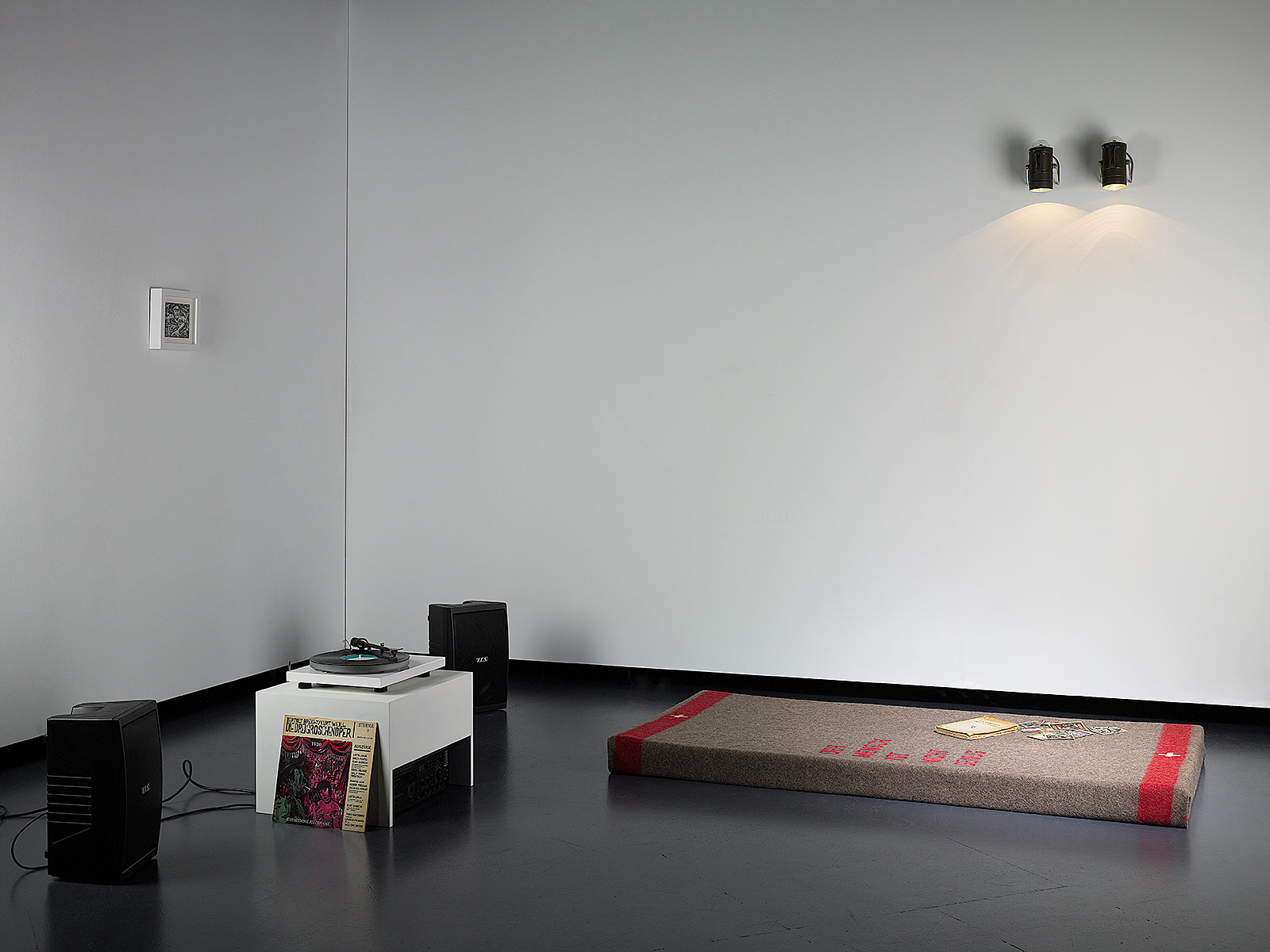 The song about the human futility, 2016
Variable size. | An original 1944 Swiss army blanket embroidered in woollen thread, polyurethane foam, an original 1930 1st edition of Revolt of the Masses by José Ortega y Gasset, a collection of 11 pieces of Notgeld (emergency currency printed in the period of hyperinflation in the Weimar Republic), an 18 x 16 cm sketch in gouache watercolours, a vinyl LP of the 1930 recording of The Threepenny Opera (1928), written by Bertolt Brecht with music by Kurt Weill, a record player, an amplifier and loudspeakers. About the love of disorder, 2016
257 x 93 x 27 cm. | A 2nd edition of volume one of Decline of the West by Oswald Spengler and a 1st edition of volume two, both dating from 1922, shown together with British army boots and acrylic paint on the wall. 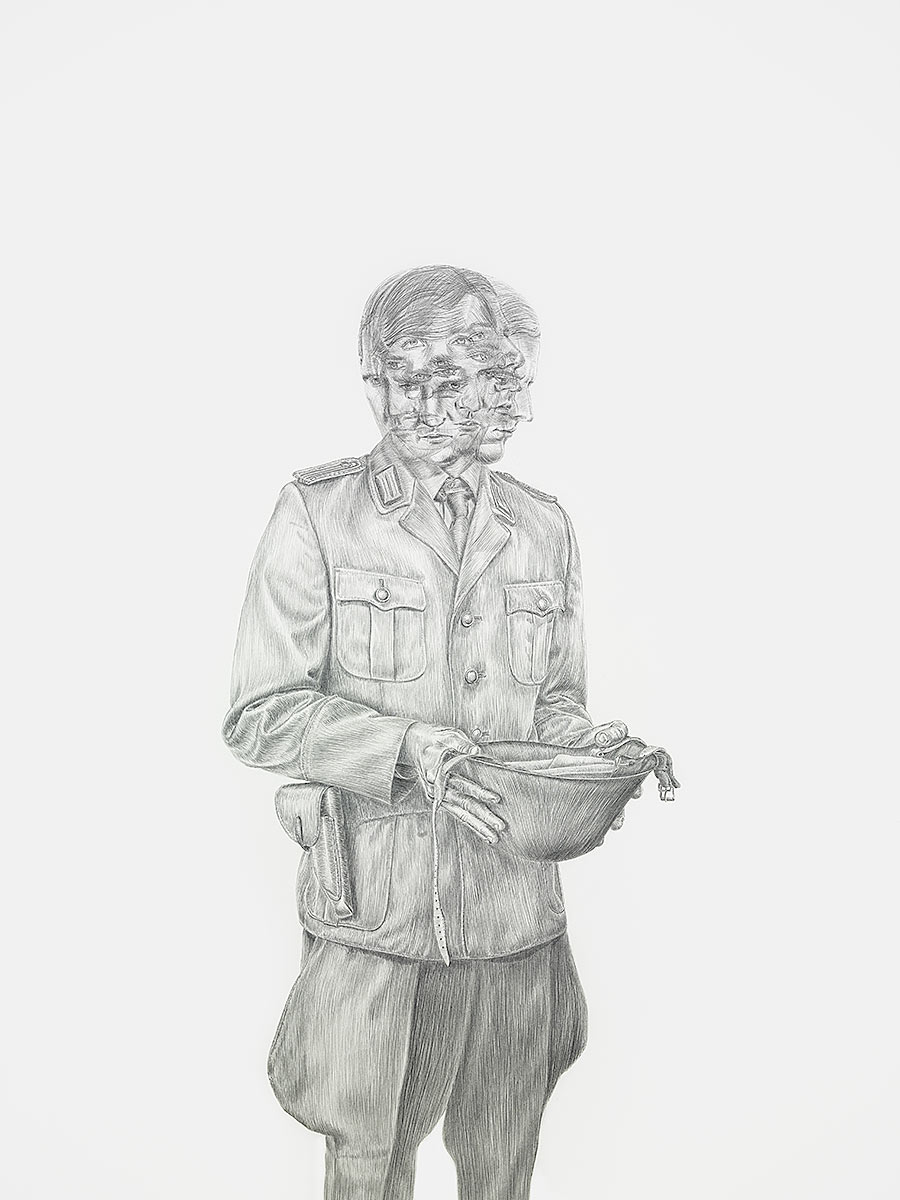 Entropy is a journey back in time across 20th century Europe, an analytical and reflective tour to try to understand our present time even better. This project is focused on the period of the 20th century between 1914, with the beginning of the First World War, and 1991, with the downfall of the Soviet Union, exploring the contexts of revolution and social and political conflicts. It focuses on marginal people who lived through those events. Events such as the mass movements which emerged at the beginning of the century and attempted to destroy the individual, the exodus and migrations of displaced people during and after the two World Wars, the Berlin Wall or the indirect victims of revolutions and the new order imposed by totalitarian regimes. The portrayed characters are isolated individuals of the conflict, situated on the side lines of the action. They are vulnerable and make us curious to know more about their background, to know what they are thinking about and what they are experiencing. In Thermodynamics, entropy is the measurable property of a system’s unused energy. It is waste energy that is left over and outside the System. In the same way, the portrayed characters in this project are of similar nature, they are outside the System, leftovers, unused energy. The journey through revolutions also takes on board their philosophical basis by means of theoretical texts published at that same time. In such a way, Marx, Lacan, Nietzsche, Brecht, Mao, Freud or Spengler, among others, serve to make us think about the ideas that motivated them and have influenced our later history to define who we are at the present time.

Exhibition:
Photo report of the Entropy exhibition in Bilbao Arte.